New South Wales saw $5.6 billion of investor loans in September 2015, taking activity back down to December 2014 levels. This has cooled down the investment property market….this I will not disagree with.

However, it is interesting when we consult the data to see a pickup in owner occupied lending to record (yes I did say record) levels not seen before.  Given that owner occupied loans are 62% of all loans the overall data is up and total lending for housing in Australia in September 2015 hit a record $1.387.7 trillion according to APRA.

So while the short term impact of a tightening in the lending requirements for investment loans has slowed down the property market it has not impacted the owners market.  As such the overall statistics are moving ahead!

Lending by banks for housing 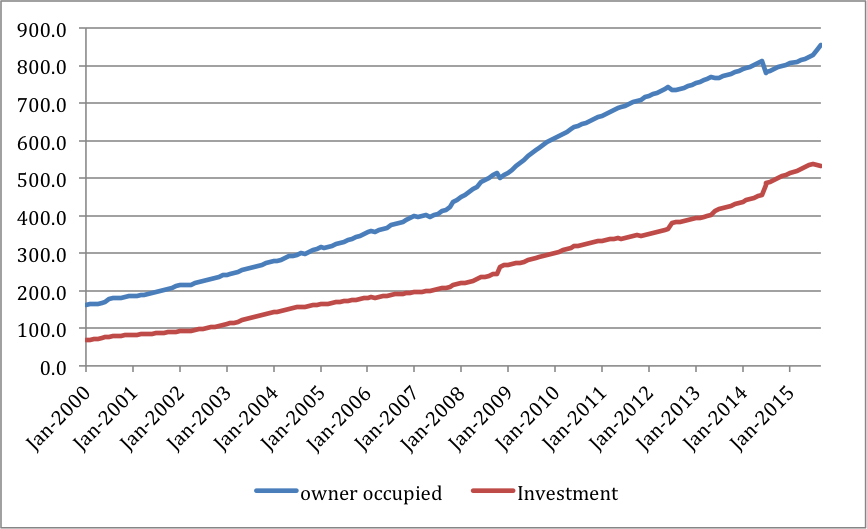 What is clear though is that the rate of growth has slowed.  If we look at the growth in housing loans we do see that both investment and owner occupied loans have moderated to about 8%pa.  But again this is still a positive growth number.

I must admit that the recent changes in the sentiment of the Sydney property market, especially for units, has been reasonably negative.

It is not my job to forecast where this will go, but there seems to be less buyers at the moment.  All I can do is review ‘the market fundamentals and try understand what is going on.

Rate of change in home loans 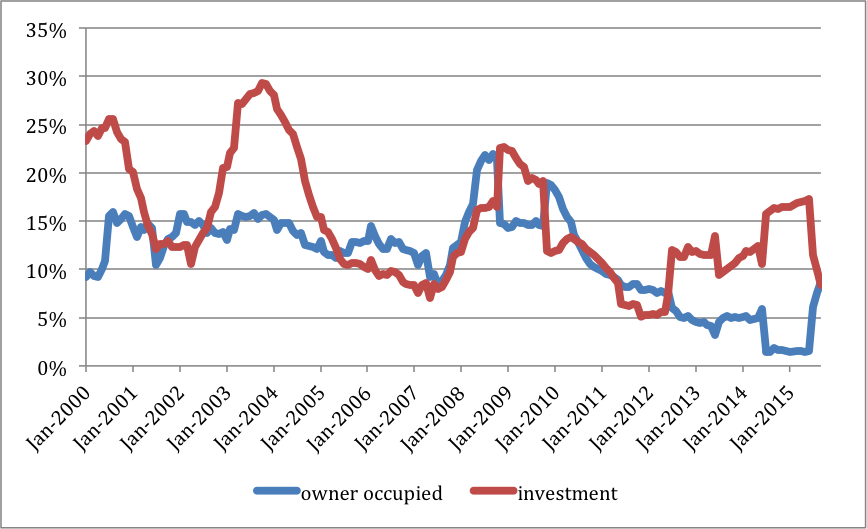 One of the fundamentals is clearance rates.  According to CoreLogicRP Data:

Over the week there were 3,274 auctions held which was the second highest number of auctions over a week this year. CoreLogic RP Data captured results for 2,947 of these auctions which is a collection rate of 90%.

The two major capital city markets of Sydney and Melbourne are both showing variations in their latest results. Last week Sydney had 1,223 total auctions compared to 1,567 auctions in Melbourne. Sydney’s clearance rate fell from 58.4% the previous week to 58.0% last week which was the cities lowest clearance rate since February 2013.”

The bigger picture is interest rates.  There is much talk about the weak Australian economy.  We covered the views of the RBA governor recently (view article here) who indicated that we were caught in the crossfire of a Chinese slowdown.

Australia has ridden off the back of china’s boom for 20 years.  So much so that we missed the GFC blip and have had uninterrupted growth for longer than most can recall.

Now China has turned down we are feeling the effects.  Not just in the resources sector but also in the overall economy.  But this is a passing phase.  I cannot see interest rates rising in the short term with all this talk about recession and slowdown.

So with any market what we are seeing is a rotation from one segment to another.  The fundamentals which support are still there – interest rates – but the buyers are now owners not investors.