Last week we saw the Reserve Bank of Australia keep interest rates at 2%. It now seems that interest rates will stay down for some time.  In fact they may go lower.

Reserve Bank of Australia governor – Glenn Stevens –spoke at the Economic and Social Outlook Conference in Melbourne in a speech title ‘Path to Prosperity’. He commented that the current path of the economy didn’t seem much different today from six years ago.

Six years ago the GFC had just hit. While the rest of the world was decimated by the GFC, Australia was somewhat insulated with the resources boom keeping our economy solid.  Now with China faulting we are finally feeling the delayed effects of the GFC in Australia.

In his view the “decline in resources sector capital spending was now roughly at the halfway stage, but nonetheless over the past year the non-mining side of the economy had generated a good number of jobs.”

“The rebalancing is occurring. It isn’t as seamless as it would be in an ideal world, but we don’t live in such a world,” he said.

In the last six years the Australian economy’s exposure to China had increased. So China’s prospects matter more to us now than with the GFC hit.

In his words “The current rate of growth of the Chinese economy is uncertain, as is its future growth rate.

In my words this all implies that interest rates in Australia are not going to increase for some time.

This is good news for property investors!  While we are in the midst of what I would call a buyers sentiment blip we are also in the middle of a period of structurally low interest rates, according to our RBA governor. 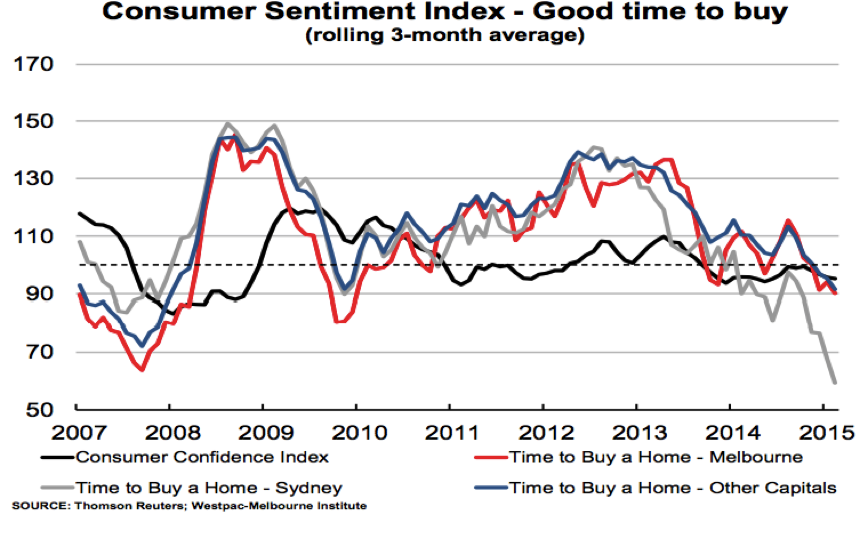 This week NAB Economics reduced its forecasts for house price growth to increase 2% in 2016 (from 3%), largely reflecting a slower pace of growth in Sydney and Melbourne.

“Risks have increased, however, especially in the apartment market which has seen a sharp increase in construction activity.”

NAB Economics is expecting average national house price growth of 9.9% for calendar 2015. This is much higher than they expected earlier in the year. 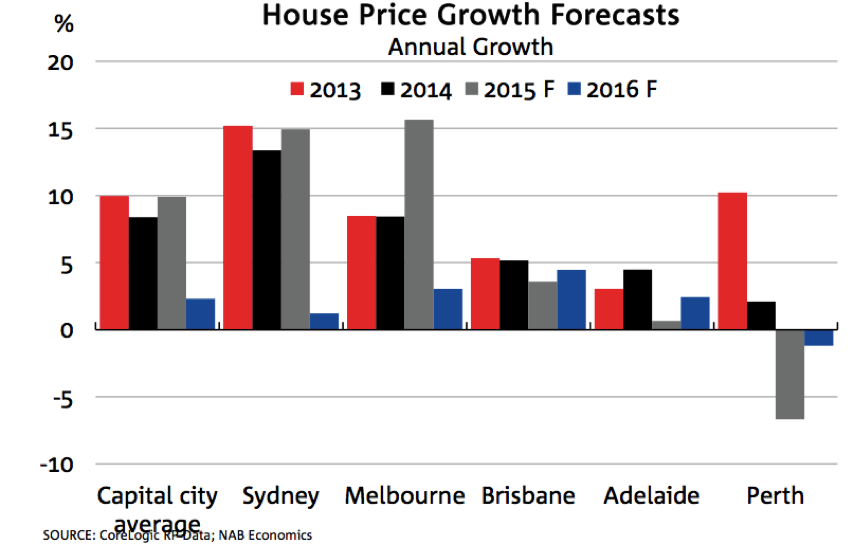 “To capture the effects of lower interest rates, it is more informative to compare median house prices to the hypothetical borrowing capacity of the average household (in each respective state). This comparison suggests much less cause for concern”.

“Additionally, regulatory changes to address risks in housing credit (particularly investor credit) have tightened conditions in the mortgage market, which is likely to have at least some impact on housing demand (even if only at the margin). However, the response from some corners claiming that these factors point to a sharp correction in house prices in the medium term, are extreme in our view.”

The International Monetary Fund (IMF) whose primary purpose is to ensure the stability of the international monetary system, also suggests interest rates should stay low.

The IMF in September stated “Monetary policy should remain accommodative given the sizeable output gap and subdued inflation, and stand ready to ease further should the recovery fall short of expectations”

They also concluded in the same analysis that house prices in Australia were moderately higher than fundamentals, but less overvalued than ‘a comparison to historical or international averages would suggest.’

NAB agrees with the IMF’s findings.

While measures of pent-up demand are highly sensitive to the assumptions used, simple measures such as rental vacancy rates suggest that pent-up demand is still supportive in some markets, especially Brisbane and Sydney.

I hope you find these words somewhat comforting.  Continued low interest rates, expected modest capital gains in 2016, and measures of pent up demand still being supportive such as low vacancy rates.