Recently there has been much talk about an imminent rise in U.S. interest rates.

The following article paints a different picture about the US economy and how they may need to hold back on raising rates. As property investors and owners interest rates are a key metric to monitor. I hope you find the read interesting and helpful.

Rates to stay low, but they have already risen for corporate America

Recent actions in the share market, revelations of much weaker Chinese growth, a very weak US job market, and the resumption of quantitative easing in Europe suggest we are in for a tougher economic period. All this talk about rising interest rates now seems to have faded. Nobody is quite sure where we are or where we’re going, but we all seem to think we’re going to get there soon.

Weaker US economic conditions points to rates being kept on hold

The big picture we are seeing in the US is that economic growth looks much weaker. According to Mauldin Economics “Blue-chip estimates right now are that it ran at near a 2.5% annualized growth rate last quarter. However, the Atlanta Fed has sharply revised their GDP estimate for the third quarter down to under 1%. (See chart below.)” 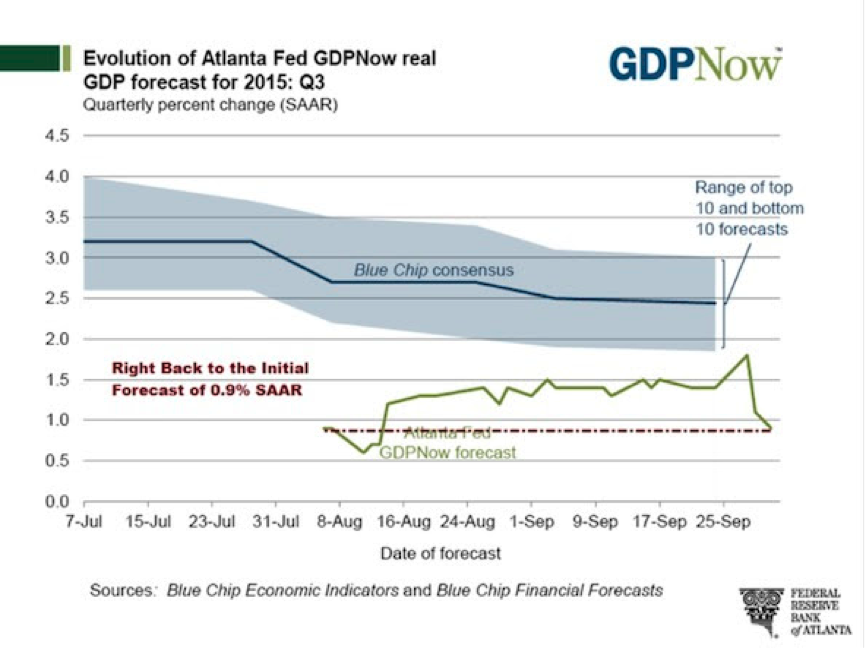 “Data from the last few weeks suggests that we need to be on “recession watch.” Global GDP is clearly slowing down, and the data we are getting from the US suggests that we are going to see a serious falloff in GDP over the next few quarters….The totality of this data says that we have to be on alert for a recession, because a recession will mean a full-blown bear market (down at least 40%), rising unemployment, and (sadly) QE4.”

Lets look at the US in a little more detail. There has been much talk about a rise in US interest rates for a long time. Looking at this data it now seems they are on hold. The jobs report on Friday has been described as “just ugly”. Private payrolls increased by just 118,000, government payrolls increased by only 24,000. The September payroll report also revised down the numbers form the previous two months (August 37,000 jobs, July down 22,000), So the average for the last 3 months was 167,000 down from an average of 231,000 the previous 3 months and 260,000 the prior 6 months.

But when you adjust this for a contraction in the workweek to 34.5 hours from 34.6 hours in August, which is effectively equivalent to an added 348,000 job losses.

So in adjusted terms the September payroll number could actually be minus 265,000 in September. Should this continue there would be a rise in US unemployment which is currently 5.1%

Commentators such as David Rosenberg have said : “Have no doubt that if the contours of the job market continue on this recent surprising downward path… market chatter of QE four by March 2016 is going to be making the rounds.”

So this is interesting. In the last few months commentators have stopped talking up a rate rise and are now suggesting a further easing of monetary policy.

US companies doing it tough, profits are expected to fall in the short term

In the US Analysts have been cutting 3Q earnings projections which implies some of the stocks may start to look expensive, even after the recent falls in prices. Thomson Reuters data shows analysts expect a 3.9% year-over-year decline in S&P 500 earnings.

These revisions in earnings are clearly as a result of China’s weaker import demand which is hurting all kinds of companies, especially raw materials and heavy machinery suppliers like CAT.

The bond market is also telling an interesting story. The spreads on non-investment grade bonds (BB rated or lower) have risen significantly. If we add the cost of treasury bonds (US government bonds) – 5 year (1.3%), 7 year (1.7%) and 10 year (2%) – we end up with a corporate bond yield that costs almost 9%! 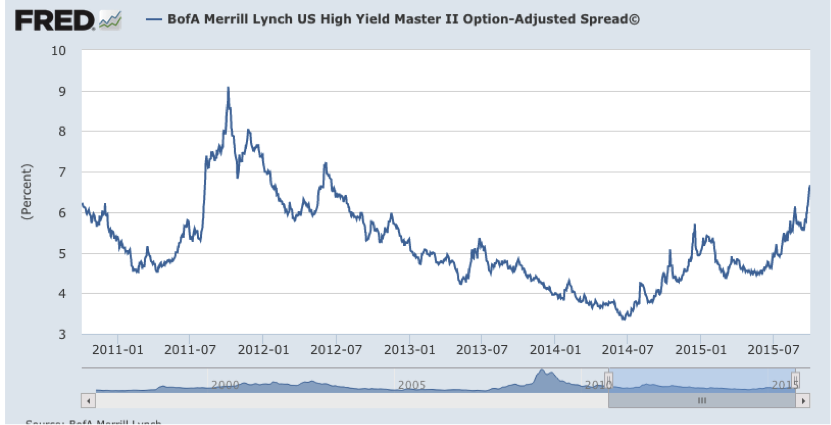 NOTE: The BofA Merrill Lynch High Yield Master II OAS uses an index of bonds that are below investment grade (those rated BB or below). This data represents the BofA Merrill Lynch US High Yield Master II Index value, which tracks the performance of US dollar denominated below investment grade rated corporate debt publicly issued in the US domestic market.

So with this backdrop there are a number of risks emerging. Lets recap the headlines:

One of the key risks facing the corporate world is debt default. The rise of the cost of debt has been alarmingly fast, up 3.5%in the last 12 months. Within a year we have seen the spread on corporate debt almost double from 3.5% to almost 7% implying US companies outside the top tier are now having to pay close to 10% for borrowings.

Since the GFC global debt has increased $57 trillion. This is off the back of very low interest rates created by a loose monetary policy globally. Global corporate debt has increased from $38 trillion to $56 trillion in this environment. This compares to the relatively small size of the US stock market ($18.7 trillion) and the Australian stock market ($1.3 trillion).

What this trend in debt growth indicates is that the word stock markets are heavily exposed to a rise in the cost of debt. Combine this with weaker or even falling earnings and we are in for a rough ride while the markets readjust to a world of slower growth, lower commodities prices and higher risk premiums.

The one positive from this story is that interest rates are unlikely to rise in the near term. This is good news for mortgagees and property investors. There also appears to be increasing risks for investors in offshore shares. The risks in the local Australian share market are mixed. With global growth looking precarious the risk profile of Australian resource companies remains high.

While there have been big drops in share prices in the last 3 months there continues to be significant risks in future earnings given the outlook for the Chinese economy. On the flip side Australian banks are now yielding an attractive 8-9% if you gross up dividends for franking credits. Given that the banks have to raise more capital to support the regulatory requirements of Basel III ($11 billion by June 2016) it is unlikely they will cut their dividend in the short term.