The state of the residential property market is always somewhat unpredictable. Booms usually go for much longer than most expect. However, when it turns it usually turns quickly.

This reminds me of a quote:

The trouble with the future is that it usually arrives before we are ready for it – Arnold H. Glasgow

This article looks at the fundamentals of supply and demand of residential property and how this affects property prices.

Paul Bloxham, HSBCs Chief Economist recently reviewed the supply and demand of the Australian residential property market. In a nutshell Paul concludes that the national market supply will not meet demand until 2017. But, as with most markets there are markets within markets with significant differences.

NSW continues to be supported by under supply of housing stock while Victoria has the highest risk of oversupply.

“However, despite the uncertainties, it is clear that the recent ramp-up in housing supply means the cumulative housing deficit is diminishing. Our estimates see the national housing market in balance by 2017. Across the states, Victoria has the highest risk of oversupply, while NSW and Queensland will have undersupplies for some time yet.”

Some would say this is good news for investors in property following the recent weakening in sentiment after changes in bank lending regulations. These changes restrict the lending practices of the banks for investment property loans.

The changes in banking regulations essentially imply that The big four banks and Macquarie will need more shareholder funds for every loan they write.

According the SMH “Australian Prudential Regulation Authority said…..the average “risk weighting” for home loans needs to rise from around 16 per cent to “at least 25 per cent”.

These changes come into effect on July 1, 2016 and suggest that the banks will need an additional $11 billon of shareholders funds just to support their current loan books.

However, despite this banking regulation hiccup there are still a number of positive fundamentals supporting the residential property market.

+ Low interest rates – they could even go lower

+ A lower $A – making Australian property attractive for offshore buyers

“Although there has been a lift in residential construction in most states recently, there have been stark differences in housing supply and demand dynamics over the past decade.

Victoria and New South Wales (NSW) have experienced similar levels of population growth since around 2007; however, in Victoria, construction has kept pace with the increase in the population, while in NSW it has not (Charts 8 ). Since the beginning of 2007, the population of NSW has grown by an estimated 813,000 people. In Victoria, the increase was almost identical at 815,000 people. However, over that time, NSW has added 214,000 dwellings, while Victoria added 307,000.

Supply as measured by dwellings approvals have shot up strongly while demand measures like population growth have slowed dramatically. Assuming current construction, and less than 2% growth in households, the supply deficit will disappear by 2017.

“Just how quickly we will work off the housing undersupply will depend on a number of factors, including how many dwellings are built from here, how much population growth slows and, of course, how many people there are per household.” 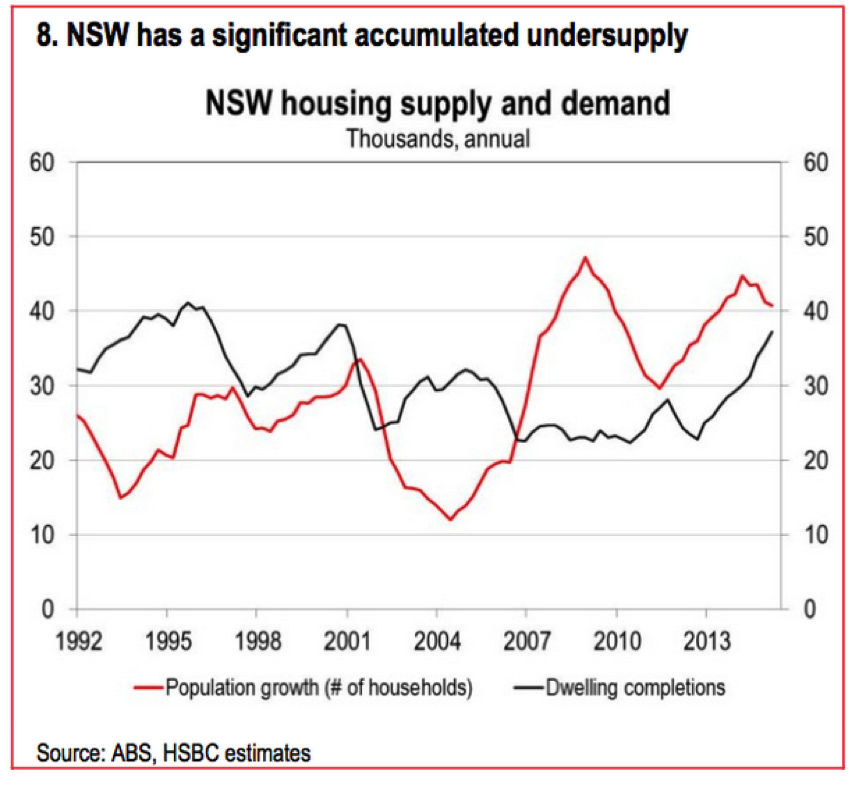 “These disparities across the states mean the national story of a housing shortfall does not apply evenly. Our estimates show significant shortfalls seem likely in NSW and Queensland. In contrast, Victoria, South Australia and Western Australia appear to be much closer to balance. These trends in housing demand and supply are no doubt contributing to the strong growth in housing prices in Sydney and weaker housing price growth elsewhere (Chart 10).” 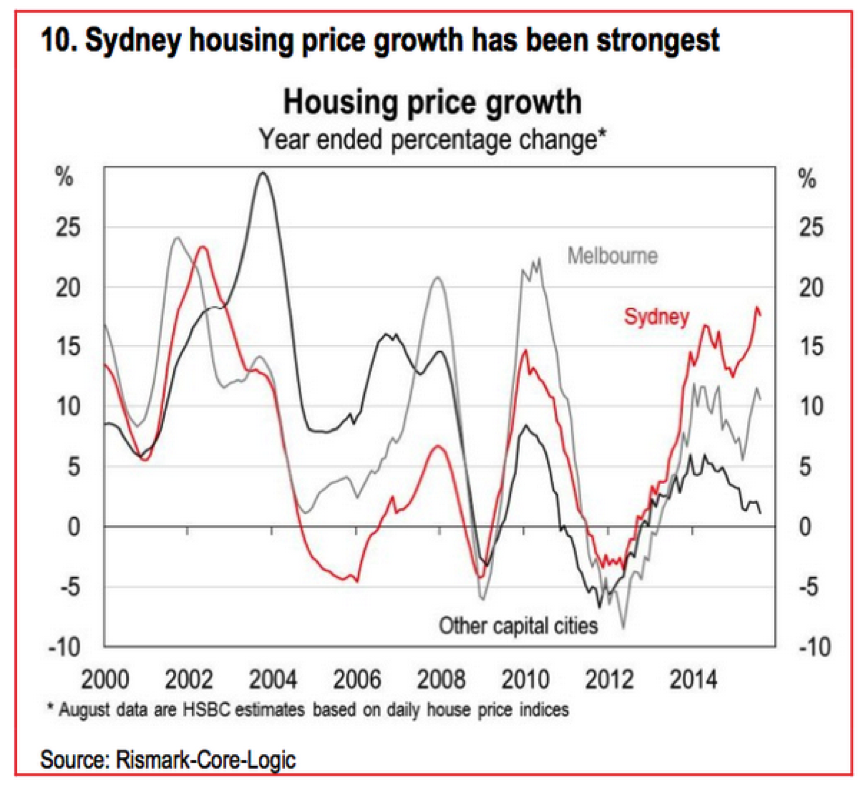 Removing Sydney and Melbourne from the national market leaves a market where property prices have almost stagnated. This weaker price growth coincides with greater supply of housing stock in those states.

If estimates prove true it looks likely that price growth including the strong Sydney market will moderate if not stagnate in 2017. Other states may not prove as robust and could experience weaker price growth as early as next calendar year. Victoria has been tagged as the highest risk of oversupply suggesting weak price growth. NSW in particular Sydney could have another good year, but one would have to think that this would be the limited to single digit growth from here.