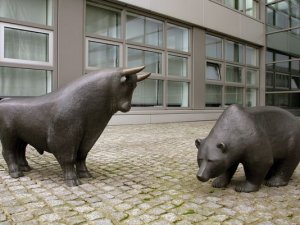 In a market where there is so much at stake there will always be two opposing views. Recent changes by APRA to lending criteria has created a pause in the bullish sentiment of property investors. I for one can vouch for this.

Last Saturday we did an open on the city fringe and you could see there was a lull in play. Normally I’d arrive and get set up and the investors would be lined up ready for the clock to tick 10:30, and boom they’re be up the lift and I into the “open”.

Well two Saturday’s ago you could swing a cat or run down the street naked because there was nobody there… The world had ended for all to see. The Bulls were gone and the bear had scared the crowd away!! I was thinking to myself is that it? Is the property run over? My experience told me to hold my nerve but I was asking myself questions.

As they say in the movies “it will all work out in the end, and if it doesn’t it wasn’t the end”.

Well what a difference a week can make!

This Saturday the buyers were back in numbers. That same open on the city fringe was bustling with a constant stream of investors and I didn’t get home until 4pm because I did two additional opens for investors who couldn’t make the open!

I’m not suggesting that the boom is back but there is certainly a market there with buyers keen to look.

Last week Aussie Home Loans chief John Symond made the comment at the Citibank conference “there’s buckley’s chance of a price correction.” Implying the Sydney property market still had a lot of support. “I think we’re going to see a more flat market,” he said.

But a market is not a market without an opposing view. LF Economics duo Lindsay David and Philip Soos have lobbed their submission, titled The Great Australian Household Debt Trap. They passionately state:

“Government, the FIRE sector (finance, insurance and real estate) and the mainstream economics profession predictably deny the existence of a housing bubble, but Australia’s economic history demonstrates they occurred during the 1830s, 1880s, 1920s, mid-1970s and late 1980s.

“The bursting of these bubbles invariably caused economic recessions and depressions.

“Contrary to the analyses of the vested interests, the data clearly establishes Australia is in the midst of the largest housing bubble on record.

It is argued there are two primary causes for the housing bubble: a rapid acceleration in mortgage debt and perverse taxation policies encouraging speculation.

So there you have two very different views. I’m not inclined to profess a view about the market, but I will point you to an article we published in September that talked about the supply and demand forces on Australian property.

The Marketplace : NSW CONTINUES TO BE SUPPORTED BY UNDER SUPPLY OF HOUSING STOCK – ARTICLE LINK